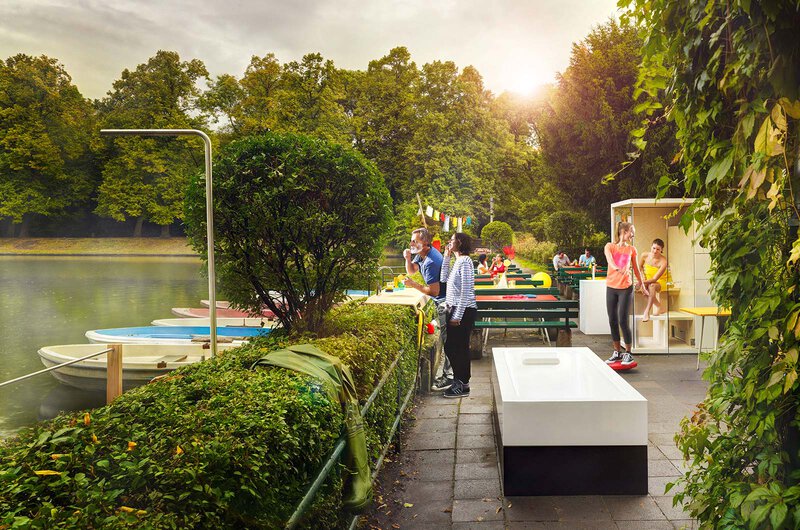 Intimacy and shared experiences don't have to be mutually exclusive. The Busy Bathroom is the hotspot of a modern lifestyle and, with its concept, furnishings and equipment, caters to the long-suppressed need for communication in the bathroom.

Busy Bathroom – up close and personal

It's not that long since we relinquished the idea of the "front room", sofa protectors and all, in favour of a living room filled with life where the entire family can enjoy its time together on an everyday basis. The emancipation of the kitchen cell and its opening up towards the living and dining area is even more recent. In many a recently published study on modern living, architects and designers are now even portraying the bathroom as a more or less open zone – open to the bedroom, open to the garden or even open to the living area.

In fact, there isn't actually any need for innovative bathroom planning to go that far. It's quite enough to contemplate the idea of opening up this very private space for several users at the same time. In their Pop up my Bathroom trend forum, trade fair organiser Messe Frankfurt and the German Sanitary Industry Association (Vereinigung Deutsche Sanitärwirtschaft VDS) have now given this idea a name: the Busy Bathroom – a place full of activity that pulsates with life.

As individualists, we value the intimacy of the bathroom

There's no doubt about it: as a society of individualists, we value the intimacy of the bathroom because it provides an opportunity to take time for ourselves. But that wasn't always the case. Instead, it is a reflection of the acquired behaviour our culture teaches us in the course of our lives, as is demonstrated by the familiar scenes of exuberant family life in which children – often to the chagrin of their parents – instinctively turn the bathroom into a social hub without any inhibitions whatsoever. But in later life too, the bathroom is the setting for more social contacts and intimate encounters than we generally realise. Similarly to the kitchen, the bathroom is a place of daily routines where, besides satisfying existential needs such as eating (in the case of the kitchen) and hygiene, we also satisfy our need for communication and socialising. For in the bathroom, we don't just take care of ourselves but of others too: we clean our children's teeth, scrub our partner's back while he's in the bath or hand him a towel when he's done, comment on the digital display on the scales and the calorie counter on the gym machine, comb our siblings' hair (or maybe pull it instead), help our best friend with her make-up or our boyfriend with his sunburn, get together after exercising for a session in the sauna or help our parents get out of the bathtub. It is a place where we are close to one another, where we show our affection and seek the approval of our family, partner and friends. 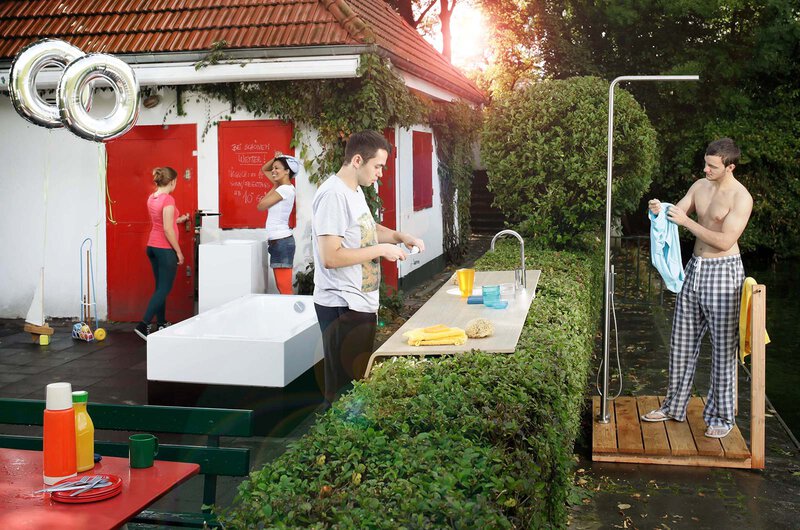 More than anything else, the Busy Bathroom is about creating possibilities for joint, barrier-free usage, communication, multifunctionality and wellbeing, thus allowing users to share more time and intimacy with family and friends.

The bathroom is a gathering place

During the morning ritual or evening chill-out, the bathroom plays the same role as the kitchen at a party or the make-up mirror in a nightclub restroom: it is the group's ultimate gathering place. With the difference that it calls for a high degree of familiarity or at least intimacy; the kind of familiarity that comes from years of living together – or from a fragile feeling of closeness that actually only arises at the moment of encounter. But no matter what, the bathroom itself, the place per se, always creates a special atmosphere, a sense of opening up to one another. Whether it serves as an island of calm in the turbulent sea of everyday life or a sheltered space for open encounters – the bathroom can become a magical place where special experiences occur, from an inspiring shower all the way to an initiation talk between father and son, mother and daughter or two close friends.

A far greater number of the communicative functions the bathroom performs are of course rather banal: it is where we discuss our plans for the day in the mornings, where we express criticism and voice motivation, whilst a double washbasin ensures that things keep running smoothly. This is where we laugh under the shower and strengthen our relationships by sharing the bathtime fun. This is where we pass on what we know about the right way to behave, personal grooming, first aid and beauty care. It is where we scrutinise our self-image by consulting not just the mirror but our partner too. And – again under the critical gaze of an interlocutor – it is where we primp the image we want to present to the outside world once we've done washing, putting on our make-up, doing our hair or adjusting our tie.

A growing number of people are voicing the need to share these things with a partner and be in the bathroom with others from time to time. Not always, but now and again. The amount of space consumers are increasingly demanding for their bathrooms should not just be interpreted as the need for a private spa to be used alone. For part of the reason why demand for large showers, double-ended baths and double washbasins is growing is that the bathroom's popularity as a jointly used room is growing too – and not only amongst families. Today the bathroom serves not just as a place for personal maintenance but for health and relationship maintenance as well. Accordingly, people aren't only cuddling on the sofa, they're snuggling up in the bathroom too. What better response could there be than to cater to the desire for more cosiness and create space for seating, fitness equipment and more room to move in general? Room for playing children, yoga exercises, press-ups, bookworms and glorious relaxation.

One area that will probably continue to be largely disregarded when it comes to communicative needs is the toilet. For some years now, the trend has been to separate or even remove it from the bathroom proper: the loo is migrating out of the bathroom and into a separate lavatory that is accessed via the bathroom or hallway. This is one respect in which our bathroom culture differs from that of our ancient Roman role models and pre-modern practices.

The modern bathroom is a combination of old and new bathing culture.

The modern bathroom is a combination of old and new bathing culture. For it's not as if the bathroom's communicative functions were simply switched off in the years when it was slowly but surely being turned into an individual wellness temple – it was just that people didn't really want to admit to the existence of those functions. Accordingly, modern role models and forward-looking space concepts are in short supply. And yet the Busy Bathroom isn't just attractive for big families and shared apartments. Even dyed-in-the-wool singles enjoy company and might want to share their whirlpool or bath with somebody every now and again – especially if they've got one of the increasingly widespread bathtub models with a central drain. Families, on the other hand, need space more than anything else – both in the sense of room to move and in the sense of storage space, with a double washbasin and plenty of shelves and cabinets. With this in mind, the central theme of universal design seems more topical than ever, for besides providing an excellent design principle for a multigenerational bathroom, it can also help turn the space into a genuine gathering point for various generations, family members and friends.

In times when the everyday realities of the various members of any given community are diverging more than ever before and daily schedules – even within a family – are increasingly out of sync, the importance of the few remaining places and rituals that generate togetherness is growing. More than anything else, that means the table and the bathroom. Future bathroom design should express this and adapt living conditions to people's real needs accordingly. The Busy Bathroom provides some food for thought in this respect. At the same time, it is not so much about specific design principles as about creating possibilities – for joint, barrier-free usage, for communication, for multifunctionality, for wellbeing. Regardless of whether it's used by one person on their own or several people at the same time. After all, there's still nothing stopping you from turning the key in the lock if you want to. 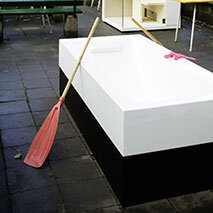 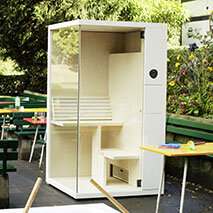 Inipi B scales the sauna down for smaller rooms without downsizing the fun – and provides plenty of space for relaxing wellness. 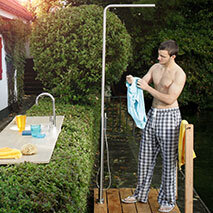 A striking, slender and sculptural design in stainless steel for a "controlled" rain shower (frost protection required if installed outdoors). 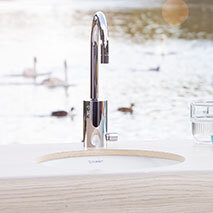 Talk to me! Intelligent electronic fittings like eMote use infrared technology to react to the approaching user. 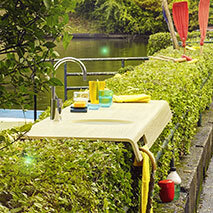 Communication hub: a big washstand like this pro- vides plenty of creative scope without looking chunky. 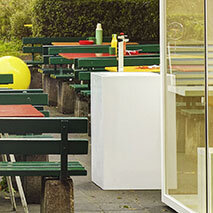 Bathroom interface: the Betteone Monolith wash- stand can be accessed and used from three sides.