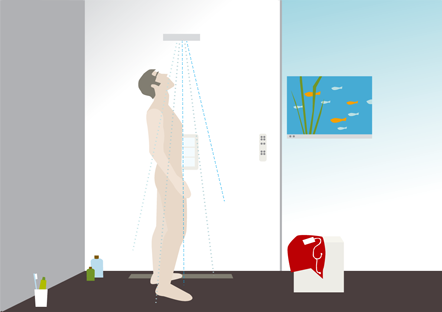 Design and engineering, which has achieved an extraordinary level of quality in the German bathroom sector, have entered into an extremely productive symbiosis that has been chalking up major successes for years. This same symbiosis is responsible for many of the pioneering innovations at the ISH 2009 – innovations that trigger consumer needs for the sex appeal of electronic fittings and permit touch-free operation or convenient pushbutton control of showers and other features.

Rarely has the bathroom industry experienced a wave of innovation to match the current advance of electronic products into the domestic sector. The technologies recently introduced into private bathrooms herald an improvement in day-to-day life and stand for a new generation of products that focus firmly on their users' needs. Besides appealing to bathroom users' desire for convenience and playful instincts, these technical developments can also put forward some extremely rational arguments: thanks to new technologies, fittings are getting smaller, water consumption is being reduced, and life in the bathroom is not only becoming more emotional, it's easier as well. But even non-electronic products like huge overhead and hand showers, the proportions of which have been reversed to enhance their ergonomic qualities, are only possible thanks to new design impetus and the industry's technical prowess. And a totally different product category is gradually advancing into European households from Asia: the shower-toilet, with a host of different electronic features ranging from an MP3 player all the way to online communication with the family doctor. For the time being, however, these gimmicks will probably spark less enthusiasm in western households than the hygienic and agreeable convenience associated with such equipment.

Mornings are always a hectic time for the Johnsons: the two boys, Tim and Sam, have to get off to school, their little sister Lisa has to go to nursery. The bathroom is a chokepoint: after all, the kids aren't the only ones who need a shower. It's actually their father who blocks the bathroom on a regular basis. He loves kicking off the Johnsons' shower marathon by taking a long shower after his early-morning jog. But even so: ever since their neighbour, a heating engineer and bathroom plumber, replaced the antiquated boiler with an eco-friendly condensing boiler and got rid of the cost-intensive continuous-flow water heater, there have already been quite a lot of changes in the bathroom. Whereas it used to take the various members of the family what felt like an eternity to set the right temperature for their individual pick-me-up shower (especially in winter), the water temperature is now constant straight away. And that was just the beginning…

USS Enterprise in the bathroom

Techness is the love of technical convenience in the bathroom, the kind of convenience that caters to both the feel-good factor and the pleasure principle. But technology can be sexy too – it didn't take much to convince Mr. Johnson of that. It was a different story with the rest of the family. When it came to turning his dream bathroom into reality, the man of the house got some unexpected support from the plumber, who succeeded in persuading Mrs. Johnson to install some new fittings that offered a whole host of benefits besides scald protection. It's actually only the boys who are really into USS Enterprise design – although Mrs. Johnson does find Captain Picard rather attractive. Nevertheless, the Johnsons soon grew to like the modern, almost futuristic design. The innovative series of fittings suggested by the plumber boasts numerous special features: the temperature can be set at the push of a button, not only in the shower but on the double basins as well. And because every member of the family has his own preferences when it comes to the "right" shower temperature, the option of selecting an individual setting for each and every one of them is just the ticket. A simple push of the button is all it takes to set an entire personal programme in motion. Besides the temperature, the huge showerhead and numerous side jets can also be set according to individual preferences. If so desired, the settings can even be overridden while the programme is running. For his post-jog morning programme, Mr. Johnson chose to kick off with a fitness-enhancing shower set at the right temperature for cooling down. During this phase, the rainshower head activates all the jets, turning into a regular monsoon for the first two minutes before automatically moving on to the next stage. Now the side jets come into play, leaving Mr. Johnson free to lather his hair unhindered. Next a lavish, intense, single laminar jet from the rainshower head helps him rinse the shampoo out – a function also much appreciated by the long-tressed Mrs. Johnson. The crowning glory of his personal shower programme is the calming dream function: besides producing a play of colours, the shower also generates a gentle haze of water from the side jets and showerhead, enticing Mr. Johnson to daydream and forget the stress and challenges that await him at the office (a function Mrs. Johnson also enjoys in the evenings after a children's birthday party or similar ordeal). Finally, the concluding cleaning function brings Mr. Johnson back down to earth. The entire programme lasted no less than 7 minutes. He could have interrupted or extended any of the individual phases at any time. The pressure-sensitive buttons are easy to operate even when wet and clearly visible without having to don glasses. The digital OLED display is particularly big. Being a caring kind of dad, he sets his daughter Lisa's programme – she's already knocking impatiently at the bathroom door. As he leaves the level-access shower, the integrated scales call out his current weight: 85.4 kg. This weight will be saved and used to calculate the accumulated average reading the scales will spit out at the end of the month.

The new toilet is an absolute highlight. The Johnsons delight in showing their guests to the bathroom and presenting their latest acquisition as proof of their progressive attitude to life. "Don't knock it till you've tried it," says Mr. Johnson at the badminton club, taking the wind out of his friends' sails. The whole family has got used to the new convenience and can't understand why they didn't buy a toilet with a built-in shower and warm air blower years ago. They decided against the other functions available, like an MP3 player – Mr. Johnson, otherwise an avid fan of technical gimmicks, didn't feel like explaining that to his buddies. It was no other than Mrs. Johnson who insisted on the waterproof OLED monitor in the bathroom. In the late afternoons, she has the bathroom all to herself and enjoys the soothing effect of the relaxation exercises issuing from the multimedia system. This particular afternoon, she opts for the "Mountain Lake" programme. The clever staging of several partially concealed water sources and around 56 light sources immerse the bathroom in an atmospheric Alpine landscape. Mrs. Johnson would never have believed technology could conjure up so much nature in the bathroom.

The tech-savvy bathroom – Germany lags behind

All over the world, a growing number of consumers are using technical products in their bathrooms – from wireless phones and MP3 players all the way to computers and online services. This global trend was identified in an online survey conducted by globally operating market research institute Synovate on behalf of Ideal Standard International. More than 5000 consumers aged between 15 and 70 were asked about various topics relating to the digital bathroom. One question was which technical gimmicks they would like to have or already use in their bathrooms. The survey covers the 14 most important markets in Europe, the Middle East, Africa and Asia and reveals that eight out of ten of the consumers interviewed currently use at least one electronic appliance in the bathroom, with digital scales and mobile, wireless devices like MP3 players being the most popular. Six out of ten people stated that they would spend more time in the bathroom if it were equipped with digital products for communication, entertainment and wellness. Eight out of ten of those surveyed intend to buy a technical product for the bathroom in the near future. Almost 10% of respondents expressed an interest in at least five such products. The survey reveals several clear regional differences: the Asian markets (China, South Korea, Thailand) are by far the most tech-savvy countries – followed by Russia and Southern Europe (Spain, Italy, Greece). All in all, people are most interested in entertainment electronics – with Thailand and South Korea leading the field, followed by Egypt, Great Britain and Belgium. Respondents in Bulgaria and China were very interested in digital products with a health-promoting benefit, closely followed by participants in Greece and Italy who are especially enthusiastic about digital wellness products. Youngsters (aged 15-20) show a particular interest in digital bathroom products, especially entertainment electronics.

Whenever water and electricity are to be united in a bathroom setting, the German DIN standards often raise objections. Openly accessible power connections in Protected Area 1 – i.e. in the immediate vicinity of open water sources – are also considered too dangerous. For a long time, recessed loudspeakers in the ceiling and a whirlpool tub with an underwater spotlight were the only luxuries possible in the Techness Bathroom, until low-power (12V) technology added a little zest to the disharmonious relationship between water and electricity. But now it seems as if things are about to change. Setting the water temperature of electronically controlled fittings at the push of a button and storable personal shower programmes are no longer pie in the sky. Technology is entering the bathroom to make life easier for its users. The emotional staging of water and light plays an extremely important role in all this. But it is essential to keep things simple – after all, real life is hard enough as it is.