The idea of the bathroom as a rectangular box with the wash basin, toilet, bathtub and shower lined up against the wall is passé. Today's holistic bathroom concepts provide interior designs for structuring the space. The sanitaryware sector is dividing the bathroom into different zones for hygiene, styling or regeneration.

Bathroom design has long ceased to be "mere" product design. The bathroom's altered functions and significance are not only influencing product design, they are changing the room, its size and structure as well. Which is why manufacturers' new bathroom collections are increasingly featuring ways their products can be used to exploit and structure the space. Such concepts are a response to the consumer need for holistic bathroom design and might even include interior design suggestions in the form of recommended materials, colours, combinations, lighting, accessories and so on. The sanitaryware either projects into the space or is positioned centrally, creating sightlines, interlinked areas and secluded zones. Showers are turning into room dividers, wall sections accommodate the fittings and wash basin and the toilet is doing a disappearing act, either vanishing from the bathroom entirely or at least retreating into a separable alcove. For the rest of the bathroom is now defined as living space and being decked out with relaxing furniture and cosy carpets. 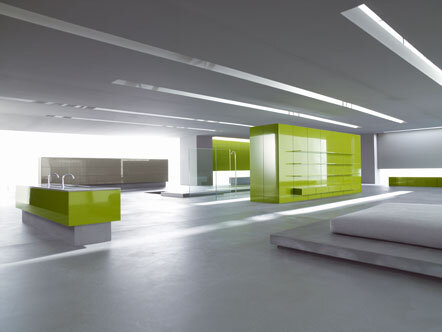 Every home – and every room in it – is an indication of the occupants' personal style. This individual character is usually expressed by the choice of furnishings and the way they are arranged in the room. How is the sofa positioned (aimed towards the television, facing into the room or as part of a communicative seating arrangement?). Is there a dining table? A well-arranged display case or an overflowing bookshelf? Is the middle of the room occupied by a modern stereo system and an inviting lounger, or does a piano take central stage? Every time people move house, they send their favourite pieces on ahead to conquer the space and take possession of it for the new inhabitants, like soldiers on an occupying mission. Only in the bathroom do most people remain guests in their own home. Apart from adding a few personal bits and pieces, there is little they can do to individualise the test-tube format. Even homeowners are hard pressed to give their bathrooms any more character than what prevailing tastes dictated when the house was built or renovated. The bathroom is generally little more than the space that's left over once the floor plan has been completed, and is then filled with the usual group of fixtures in random order. The ensemble is recruited from the collections in various styles presented by the industry. Generally speaking, the planners couldn't care less about who goes where, who gets to stand in the limelight and whether the main protagonist is obscured by the extras or has to maintain its dignity alongside the toilet. Their main concern is to make sure they can squeeze the entire ensemble onto the stage.

Whilst it might be way out of date, this modus operandi nevertheless remains the standard approach. And yet the collection principle pursued by sanitaryware manufacturers has long since progressed beyond this status. Today's product ranges are no longer just a simple cast list that follows a given pattern; instead, they contain the seeds of the intended scenography. The interior design concepts behind such collections deploy a range of sophisticated tools: the combination of ceramic suites with bathroom furniture in expressive materials, the development of matching accessories, the design vocabulary per se and fittings whose characteristic contours will only harmonise with certain ceramic products. The product scenario shown in the catalogue probably plays the most important supporting role in all this because it can be used to suggest the usage of certain materials, colours, combinations, accessories or lighting. This is the first step towards individualising the bathroom.

Working with the space

Whether it starts off with a photograph, an idea in the consumer's head or a sketch by an ambitious architect – professional bathroom planning will play an increasingly important role in future. The bathroom planner will become a director who stage-manages the individual objects, stipulating how the user will move between them and use his bathroom. The spatial quality of the bathroom will be determined by two equally important parameters: the design of the ambience and the dramatic effect of forms, colours, materials and light on the one hand; and the structuring of the space by means of strategically positioned sanitaryware on the other. To ensure the necessary freedom of movement, each piece of sanitary equipment will be surrounded by a "courtyard" – or usage zone – created by means of visual differentiation and/or structural elements and room dividers.

The interior design of bathrooms is an established discipline and calls on planners and interior designers to come up with a solution based on customer-specific requirements. But when it comes to the second spatial factor, the structuring of the space into usage zones, manufacturers and bathroom designers are discovering a whole new realm. 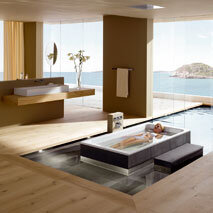 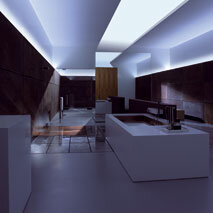 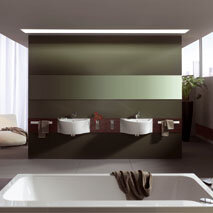 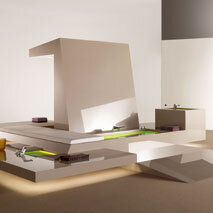 The ergonomics of needs

The design history of the kitchen is a good illustration of the impact this kind of approach can have on product design. When Christine Frederick analysed the ergonomics of the kitchen as a workplace back in 1912, her time-motion studies resulted in a totally new design for the room and products: the so-called "Frankfurt Kitchen", developed by Margarete Schütte-Lihotzky in 1926 for a social housing project, reduced what had previously been a large, eat-in kitchen to an area of just 6.5 square metres, thus saving the housewife countless miles of walking back and forth. The fitted kitchen was born. The space was mainly saved by separating off the zone used for eating.

What the story of the Frankfurt Kitchen tells us about people's lifestyle in the first half of the 20th century – and beyond – is that work and (communal) life were separated in order to make labour more efficient and use the space available more effectively. The same strictly performance-oriented approach is evident in the elimination of the pleasure principle from personal hygiene – an emotional luxury that hardly anyone could afford. Accordingly, the sanitaryware was randomly squeezed into the tiniest of spaces. Since nobody spent much time in the bathroom anyway, ergonomic analysis was superfluous.

Today, ergonomic kitchen planning also allows for usage possibilities involving shared activities. Space for socialising has become just as important as operational efficiency – hardly surprising in view of the fact that cooking and eating have been elevated to an art form.

So what about the bathroom? Here too, the paths between the individual locations have meanwhile been analysed. But in this case, it's not so much a question of efficiency as a pleasant atmosphere and the needs-based zoning of the now much bigger space available. Grooming's status within our lifestyle has been enhanced because it not only serves the need for hygiene but provides pleasure and relaxation as well. As a valuable component of our culture, however, grooming is differentiated into various sub-functions – such as performing one's ablutions, cleaning and refreshment, facial and beauty care, daily routines, switching off and relaxing, dressing and even fitness or socialising

Zoning the bathroom obviously requires a great deal of space. So it's hardly surprising that the impetus for this development came from the commercial property sector, especially the interior design of major hotels.

Guests' experience of sophisticated hotel architecture triggered a desire for similar experiences in their own four walls. And one of the first spatial concepts for the bathroom, which was implemented in its own collection (for Axor) and provides sample solutions for both the commercial and the private sector, originates from an architect with plenty of experience in designing hotel interiors: Antonio Citterio. He separated the cleaning area – comprising the shower and toilet – from the relaxation zone with the bathtub at its centre. This enabled him to establish closer links between the latter area and the bedroom. Another spatial concept took a minimalist fitting as its starting point (Mem by Dornbracht) and made the water the focal point of a contemplative design. The rc 40 cabinet system (Burgbad), on the other hand, is extremely practical and provides a modular system for versatile floor plans. With walk-in closets, wash basins and consoles, rc 40 mediates successfully between the architecture, furnishings and sanitaryware.

The bathtub makes the space

Of all the classic bathroom elements, it was the bathtub that tipped the scales when it came to interpreting sanitaryware as furniture that requires space of its own – as illustrated by Philippe Starck's first bathroom collection. Today the freestanding bathtub is the focal point of many spatial concepts that interpret the bathroom as a room in its own right, divided into different usage zones. The sanitaryware either projects into the space or is positioned centrally, creating sightlines, interlinked areas and secluded zones. Showers are turning into room dividers, wall sections accommodate the fittings and wash basin and the toilet is doing a disappearing act, either vanishing from the bathroom entirely or at least retreating into a separable alcove. For the rest of the bathroom is now defined as living space and being decked out with relaxing furniture and cosy carpets. The size and structure of this space, along with the "cast" of sanitary equipment and its positioning, must be defined in accordance with individual needs. Standard repertoires are no longer compulsory. Spatial concepts – especially when tailored to an individual, a family or an institution by a professional bathroom planner – create the sorely needed scope for individualising the bathroom.

The freestanding bathtub is a symbol of a bathroom that opens up new spaces: spaces for dreaming and relaxation, spaces for feeling alert and refreshed, spaces for care and styling, spaces for thinking. In every second advertising message and in luxurious hotel bathrooms, it stands for spacious interior concepts and a multifaceted hedonistic culture. Even if such concepts cannot be implemented in every private home, this image will nevertheless gradually change our bathroom culture. Just as Eskimos have many different words for snow, we are developing a growing number of ideas and terms relating to the various possibilities for using the bathroom. In our material-minded culture, this semantic change is first manifesting itself in an increase in the number of bathroom products and then in stronger spatial differentiation. While the Romans had their frigidarium, their massage benches and their caldarium, Dornbracht's Elemental Spa concept and product range suggests what a modern iconology might look like. But even without such elaborate ritual architecture, our bathrooms are becoming the scene of new habits and rituals that mingle water, space and time.