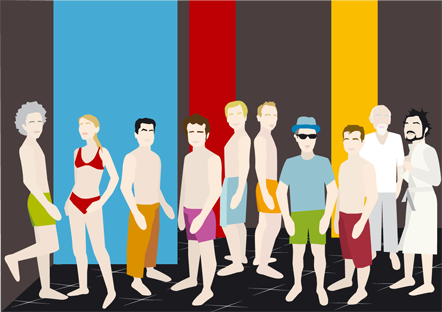 The trend towards design in the bathroom is not so much a new development as an established culture – a megatrend whose influence plays a fundamental role in every new product and concept development. The elitist idea of a so-called designer bathroom may therefore be considered passé: the average version of a new bathroom merely expresses a less pronounced and more standardised rendering of design than a big-name bathroom bearing the hallmarks of a high-profile designer. But no matter which aspect the concept focuses on, design is today the mastermind, idea supplier, innovator and style-setting element behind every bathroom. The harmonious lines that are so much a feature of current collections are just as much a product of the designers' influence as the sculptural quality of the individual components. At the same time, the trend is towards a more liberal formal interpretation of the individual elements within a collection, providing greater scope for variation and avoiding stereotype models. But design is also making suggestions about how the bathroom should be used and paving the way for technical innovations. More than anything else, however, designers have ensured that the bathroom has finally come to be regarded as a room in its own right, thanks to the cosy quality of the individual objects and their integration into snug interior design and layout concepts.

In the course of the last fifteen years the bathroom has undergone a transformation, morphing from a wet room into cosy living space that has been carefully planned right down to the last detail. Besides the design, this metamorphosis is mainly due to the consumer's growing awareness not only of aesthetics but of the pleasures of caring for and enjoying his body. Some design concepts even go so far as to relocate the ideal place for the bathtub or shower temple to the living room or bedroom, thus transporting us back to the days of the boudoir, when a zinc tub was carried into the salon and draped with cloths. Such concepts are however exceptions and should be regarded as an indication of the cultural upgrading the bathroom is currently experiencing. The long-term result of this transformation is the bathroom as a stylistically adapted but nonetheless specifically dedicated functional space. What's progressive about modern bathrooms is the cosy materials and furnishings, the elaborate technical equipment and the tendency to open up towards adjacent rooms.

The driving force behind this development was the creative determination of a few industrial enterprises who wanted to set themselves apart from the prevailing stereotype with new forms. Design stopped repeating purely traditional patterns. On the one hand, functional approaches led to the first consistently designed collections – first and foremost, Villeroy & Boch's Colani series, a range of ceramic sanitaryware based on ergonomic considerations. On the other hand, in the wake of Memphis and post-modernism, a largely norm-free love of stylistic experiment resulted in some unconventional design oddities which, from today's point of view, seem little short of eccentric. Even so, for many years, systems genuinely based on architectural considerations remained the exception. The series of fittings Arne Jacobsen developed for Vola in the late 60s was one such rarity: thanks to its modular structure and functional design, it became a classic that is still much sought-after today. Surprisingly, it is precisely this product segment, which has the least impact in terms of structuring space, that has been providing important impetus for years. Perhaps that is because it is in fittings that the style-setting principle of reduction to the essentials comes closest to attaining its ideal – a simple line. As a contour-defining object, the faucet has taken on a pioneering role and affects the design of all the other sanitaryware. It was also fittings that systematically rehearsed and promoted the return to basic geometric forms. This provided the necessary encouragement for geometrically designed ceramic fixtures, with the result that wash basins, bathtubs and toilet/bidet ranges were given an increasingly flush design vocabulary adapted to architectural design principles. Although it allowed the individual elements to retain their own profile and identity, this vocabulary nevertheless divested them of their genus-typical characteristics in favour of collection-typical lines.

But this development is also being fostered by technical advancements such as the production of thin-walled materials, the processing of ceramic ware into almost 90° angles or the reduction in the volume of fittings. The latter development is the prerequisite for minimalist design. Fittings manufacturer Dornbracht, whose reputation is based on its design icons and innovative concepts, lives from its leading models in the premium segment, i.e. the Tara and Mem faucets created by Sieger Design. All in all, besides consistent minimalisation, ambitious design is characterised by two formal principles: firstly the ideal-typical reduction of a traditional form to a modern "archetype", and secondly a processual approach whereby the archetype is reinterpreted by breaking it down into its individual components and reassembling the radically simplified elements. But the Starck 1 bathroom collection developed in a collaboration involving Duravit, Hansgrohe and Hoesch does not only represent a milestone in terms of the faucet. Above all, it was the holistic design approach and individual status afforded to the sanitaryware that constituted a lasting change, permitting the unimpeded furnishing of a "salon d'eau", as Philippe Starck proclaimed. The product design itself represented a reworking of cultural forms into a modern design language and their translation into ceramic ware. The wash bowl, for instance, placed on the table and equipped with its own plumbing, turned into a success story of the modern wash-place, and is now available not only in ceramic but glass, cast mineral, stainless steel, plastic and even wood as well. In Duravit's Happy D and PuraVida ranges, Keramag's Flow collection (design: Hadi Teherani) or the SimplyU and Moments collections that Artefakt designed for Ideal Standard, the harmonious but nevertheless differentiated appearance of each individual item within a collection seems to be the distinguishing feature of modern sanitaryware design. An additive use of forms dominates, and a growing number of sculptural solitaires – especially free-standing bathtubs that are nevertheless integrated into the design concept – are making the standard wet room bedecked with tiles a thing of the past.

At the same time, designers and consumers are becoming increasingly self-confident when it comes to combining the individual elements. Rounded, natural-looking geometric shapes, basin hollows organically embedded into surfaces, combinable variant forms within collections that are being refined all the time and the uninhibited reinterpretation of modern classics or 70s icons all indicate a development towards greater freedom and a less severe approach to the way models are declined in accordance with the collection principle. The so-called "product families" are also adapting to the changing times and, with the aid of complementary components, will offer solutions for temporary partnerships of convenience, purists and patchwork families alike. The future is complementary – aesthetically speaking.

Text and quotations: Frank A. Reinhardt