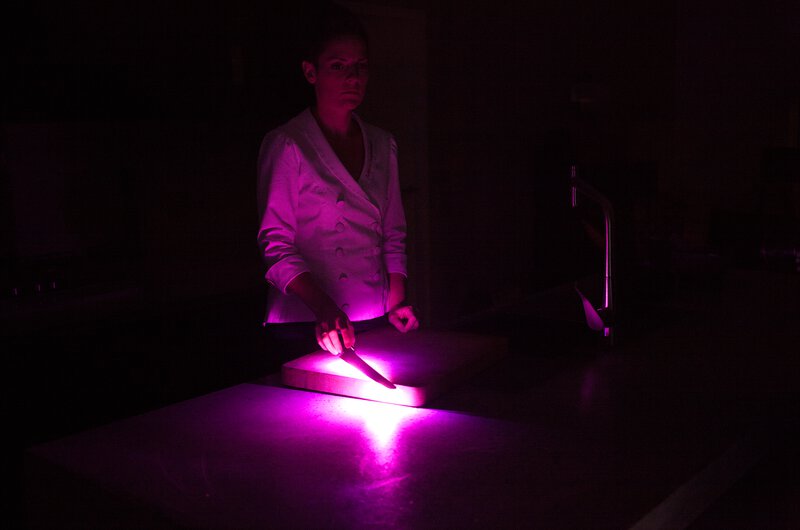 Hansgrohe has collaborated with global culinary experts – Quique Dacosta and Sybille Schönberger – as well as international light art specialists, Lichtfaktor, to create a series of stunning artworks that bring to life the movement in the modern kitchen.

The new kitchen mixer from Hansgrohe, Metris Select and Talis Select, now combine a pull-out spout with the select technology. This solution allows turning the water flow on and off by simply pushing the select button, ergonomically positioned on top of the pull-out spout. Temperature and water volume can be preset by turning the lever handle. This considerably improves the freedom of movement and ensures a better flow in the kitchen.

Quique Dacosta from Spain and Sybille Schönberger from Germany visualised the concept of freedom of movement in the kitchen. Used to the hectic kitchen environment, each of them created one of their signature dishes – La Bruma from Quique Dacosta and Roasted Salmon Tartare with Coriander Yoghurt on Wild Herb Salad from Sybille Schönberger – while attached to special light sensors that allowed the Lichtfaktor team to track and capture their movements. These movements were then brought to life in the light art photography and film. “The light art is something entirely new and creative for me. Chefs are artists in their own way – creative people”, Sybille Schönberger commented. “The photo shoot was great, and the pictures really captured the frantic and beautiful energy in the kitchen.”

Richard Grohe, Deputy Chairman of the Executive Board at Hansgrohe SE, said: “Modern family kitchens are becoming more advanced and more adventurous than ever before and as a result, they’re requiring innovations like the Select technology. We were amazed at how the light art creations showed how varied and numerous flow in the kitchen can really be. The Hansgrohe Metris Select kitchen mixer is designed to help kitchens be more efficient and let people focus more on the excitement of cooking.”