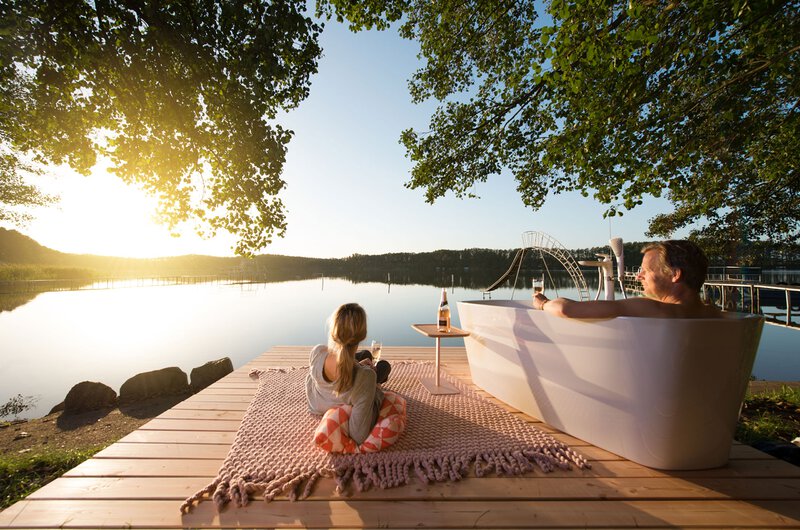 Let’s start the journey to the different bathroom trends of this world in the USA with the latest luxury lifestyle trend: the ‘master bathroom’. There are more luxury bathrooms being sold than ever before – for exclusive houses even in ‘his’ and ‘hers’ format. “The master bathroom is a jewel in the crown,” Jim Winters, a 61 year old pensioner, tells the Wall Street Journal. He owns a 3,480 square metre house whose bathrooms take up a third of the living space – and this is not exceptional. Real estate agents say that the demand for elite bathrooms is growing and in cities like New York there is no shortage of penthouses with 100 square metre bathrooms. In the land of the unlimited bathroom the real deal is one which is open and set apart, in which around the egg-shaped bathtub in the middle of the room there is also more than enough space for kitchen-unit sized wash basins and luxurious showers with XXL fittings. Pure shapes and minimalist geometries are combined with bright colours and polished chrome to create this architectural mood of modern city living.

Life is different in the Far East, where planers work hard to fit a lot of bathroom into a little space. Japan has a space problem and there is a shortage of living space in big cities like Tokyo. Design approaches incorporate multifunctional use and internal furnishing in equal measure with all superfluities expunged. Nevertheless the traditional sit down bathtub remains, allowing the user to be submerged up to the neck as he or she would do ritually. This is a must in the home and like the shower beforehand, which serves to cleanse the body thoroughly before bathing. The modern Japanese bathroom is predominantly white and has a delicate and simple aesthetic form. This applies especially to the cupboards that are often custom-made from fine woods of Asiatic origin. Whilst nature is invariably a feature of the inside, the toilet remains outside. Always.

In Shanghai bathing is likewise a tradition. However, what was previously celebrated in public baths, has withdrawn into the privacy of the home as people become more Europeanised. In the big cosmopolitan cities of China people live in a cultural middle ground, where their own traditional values combine with modern European glamour to embrace a plethora of stylistic influences. In China wealth is displayed just as openly as it is in Eurasian Russia, in India or the Arab states. Gold fittings and lions feet on the bathtub are taken to symbolise power, while floral Art Déco evokes a sense of elegance. The bathrooms of those who have money are differentiated by expensively made furniture in a modern interpretation of opulence. No, it does not need to sparkle all of the time: celebrated designers and architects are also gaining ground in Asia with bathroom worlds that are far removed from fashion trends and regional idiosyncrasies.

In modern Sydney aesthetic sustainability has always been high on the agenda: using natural materials and getting the right balance between functionality and luxury. In the houses and apartments on Australia’s east coast many different cultural influences are also apparent. The mix of American, European and Asian interior design is reflected in open room designs with slender, straight line furniture. Alongside the standard white fittings that are immediately apparent in many bathrooms you find lightness, wood and hand-made ceramic tiles. The colours are either typical for Australia or adapted closely to the individual environment and demonstrate the close connection between modern Australian city life and the nature that surrounds them.

Likewise in São Paulo the integration of the world outside also plays an important role – it is simply that due to high rates of criminality it happens behind high walls. Within the protected zone the houses are open and often fuse together holistically with the garden. Windows are replaced by house fronts that can be fully opened. In turn this creates completely open bathrooms, for which Brazil is obviously the best place, temperature alone being reason enough. A mixture of concrete, natural stone, traditional ceramic tile mosaics and dark wood provide the frame for minimalistic shapes. Due to the heat South Americans love to freshen up under large shower heads. Splash protection is transparent, with level access.

At Hausmann in Bad Honnef, Germany, water is sprayed on all floors. Here there is also level access, transparency and large shower heads. This old Jugenstil villa has no fewer than four bathrooms – in case the extended family wants to live a little. White fittings and straight lines are predominant in the guest and secondary bathrooms. The same is true for the children’s bathroom, while in the ‘parents’ spa only a few steps away choice accessories provide colour and a cosy atmosphere. In the separate steam shower, which was previously a store cupboard, you can wash away the stresses of daily life, while increasing the body’s own defences. Wooden furniture and flint tiles create a sense of warmth and a feeling of ‘finally being at home’. At a place that guests never get to see.

If you want to find out more about (new) global bathrooms trends, you don’t have to travel around the world. You are recommended to take a ‘trip to the bathroom’ to the ISH in Frankfurt. This is the world’s leading trade fair for innovative bathroom design (amongst other things) and it runs from 10 to 14 March 2015. The ISH Water area has exhibitors showing sustainable, designer bathroom solutions.

Further information about the ISH you will find here.