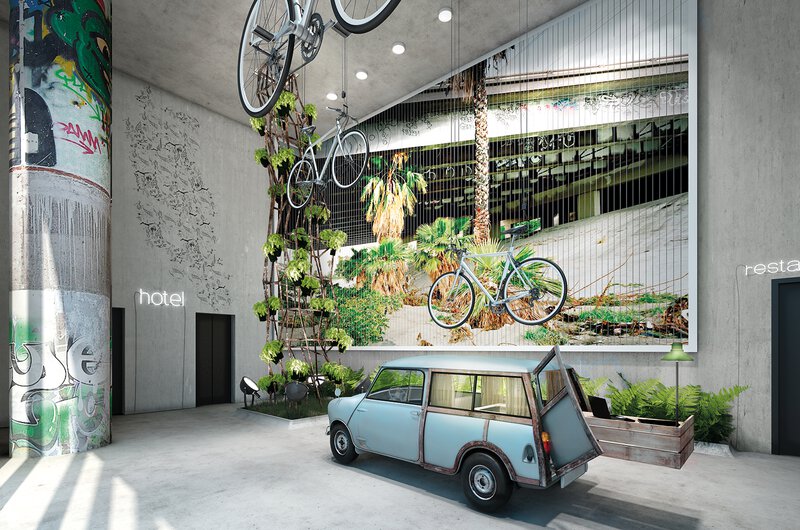 In early 2014 Berlin will boast yet another attraction, as the 25hours Group gets in gear to open a new hotel in the historic building ensemble Bikini Berlin vis-à-vis the Berlin Zoo. Under the direction of noted architectural firm Aisslinger, known for its work undertaken for de Sede, Foscarini or Vitra, the modern, upmarket hotel promises excellence at an entirely new level. In the style of other 25hours establishments guests here will find the familiar design in every detail. Nestled between the dynamic Breitscheidplatz with the Gedächtniskirche (Memorial Church) and the Kurfürstendamm on one side and the Zoo on the other, the 25hours Bikini Berlin effectively forges a bridge between vibrant city and green oasis. The bathrooms of 22 suites will be styled with innovative product highlights supplied by Kaldewei. Along with bath icons such as Classic Duo Oval Wide and Conoduo, all fitted with user-friendly electronic controls, the hotel’s design team opted to add Kaldewei’s bath audio system Sound Wave as a forward-looking new system to the bathrooms of the 25hours Bikini Berlin. It allows music and other audio files to be played via Bluetooth with the bath acting as the sound box to provide guests at the 25hours Bikini Berlin with a relaxing experience as they immerse themselves in their favourite tunes. Christoph Hoffmann, CEO/partner of the 25hours Hotel Company explains why Kaldewei fits the philosophy of the hotel in Berlin 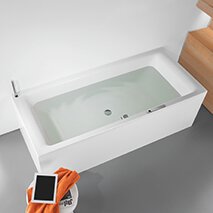 The Kaldewei Sound Wave system has a receiver that plays back audio files from a smartphone, computer, tablet PC or any other Bluetooth-enabled device. With the bath acting as the sound box, it delivers an extraordinary sound experience.

Why did you choose the Bikini Berlin ensemble as the address for your new hotel?

Berlin in general was obviously missing in the 25hours portfolio. We have establishments in almost every good lifestyle city in the German-speaking region; the culture and design capital therefore had to be in the mix. We had looked at various locations over the years and believe that the Bikini Berlin will be an effective beacon. Its post-war architecture is exciting both from an aesthetic and historical aspect, while its location at the interface between the vibrant Breitscheidplatz and the green oasis of the Zoo creates a natural tension that fuels the styling and design of our hotel.

What, would you say, makes up the ideal bathroom of a hotel – from the viewpoint of the guest, but also the operator?

A few of our hotel rooms actually feature baths, so long as space allows and the bath creates an experience rather than a nuisance. Hotel rooms, in the first instance, are perceived visually. For this reason, the bath must always integrate organically with the overall design. Other crucial factors for the guest are the feel of surfaces touched with your bare skin as well as ergonomic design. Focal points for the hotel operator, meanwhile, are effortless cleaning, but also easy maintenance of the technical parts and fittings.

In a nod to “digital bath” – why did the 25hours Bikini Berlin opt to install the Kaldewei Sound Wave bath audio system and the Kaldewei Comfort Select electronic controls?

We generally use a rather careful approach to technology when it comes to the design of our hotels. Guests tend to spend no more than a day or two in a hotel room and do not have the time to get used to new or unfamiliar toys. We have added the Kaldewei Sound Wave system and the Comfort Select controls primarily to create a wow effect. Initial tests have also shown that this equipment is easy to understand and operate. Obviously it still needs to be tested in practice – I will have to take a bath to check the sound quality!