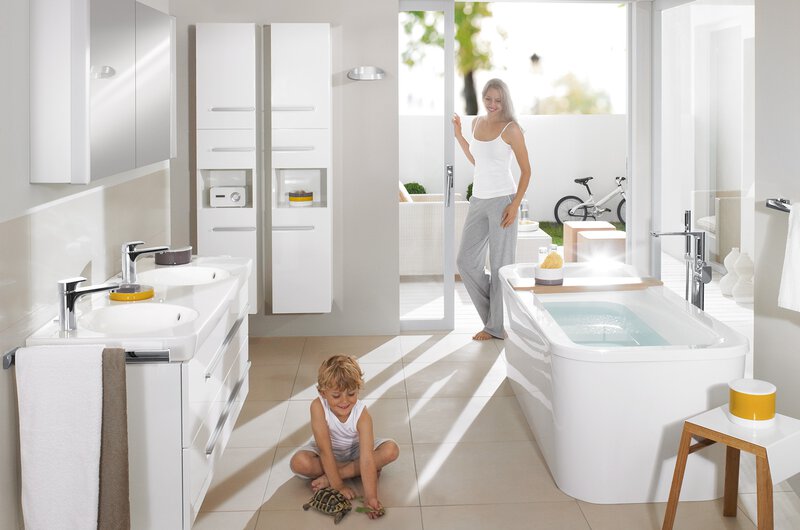 Megatrend: The bathroom as a place of encounter 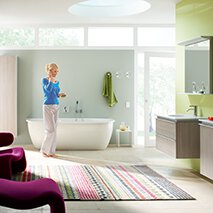 Duravit's Darling New series is particularly suitable for designing the bathroom as a cosy recreation room. 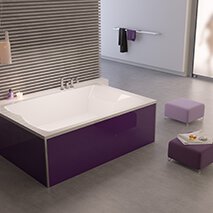 The family bathtub: the new Largo tub from Hoesch is roomy enough for two – or more! 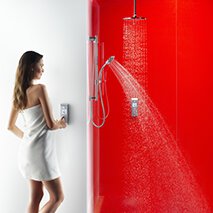 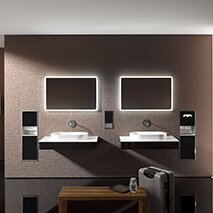 Plenty of space for two people during the early-morning rush hour: the Asis room system by Emco Bad. 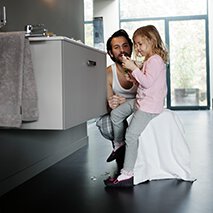 With widths ranging from 50 cm to 130 cm, Keuco's extensive Royal Universe washbasin collection has the right solution for every space – from the small guest bathroom all the way to the large family bathroom. 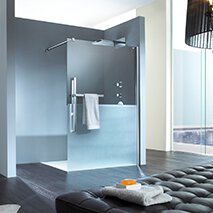 It's not that long since we relinquished the idea of the "front room", sofa protectors and all, in favour of a living room filled with life where the entire family can enjoy its time together on an everyday basis. The emancipation of the kitchen unit and its opening up towards the living and dining area is even more recent. In many a recently published study on modern living, architects and designers are now even portraying the bathroom as a more or less open zone – open to the bedroom, open to the garden or even open to the living area.

In fact, there isn't actually any need for innovative bathroom planning to go that far. It's quite enough to contemplate the idea of opening up this very private space for several users at the same time.

There's no doubt about it: as a society of individualists, we value the intimacy of the bathroom because it provides an opportunity to take time for ourselves. But that wasn't always the case. Instead, it is a reflection of the acquired behaviour our culture teaches us in the course of our lives, as is demonstrated by the familiar scenes of exuberant family life in which children – often to the chagrin of their parents – instinctively turn the bathroom into a social hub without any inhibitions whatsoever. But in later life too, the bathroom is the setting for more social contacts and intimate encounters than we generally realise. Similarly to the kitchen, the bathroom is a place of daily routines where, besides satisfying existential needs such as eating (in the case of the kitchen) and hygiene, we also satisfy our need for communication and socialising. For in the bathroom, we don't just take care of ourselves but of others too: we clean our children's teeth, scrub our partner's back while he's in the bath or hand him a towel when he's done. We comb our siblings' hair (or maybe pull it instead), get together after exercising for a session in the sauna or help our parents get out of the bathtub. It is a place where we are close to one another, where we show our affection and seek the approval of our family, partner and friends.

During the morning ritual or evening chill-out, the bathroom plays the same role as the kitchen at a party or the make-up mirror in a nightclub restroom: it is the group's ultimate gathering place. With the difference that it calls for a high degree of familiarity or at least intimacy; the kind of familiarity that comes from years of living together – or from a fragile feeling of closeness that actually only arises at the moment of encounter. But no matter what, the bathroom itself, the place per se, always creates a special atmosphere, a sense of opening up to one another. Whether it serves as an island of calm in the turbulent sea of everyday life or a sheltered space for open encounters – the bathroom can become a magical place. A place where special experiences occur, from an inspiring shower all the way to an initiation talk between father and son, mother and daughter or two close friends.

A far greater number of the communicative functions the bathroom performs are of course rather banal: it is where we discuss our plans for the day in the mornings, where we express criticism and voice motivation, whilst a double washbasin ensures that things keep running smoothly. This is where we laugh under the shower and strengthen our relationships by sharing the bathtime fun. This is where we pass on what we know about the right way to behave, personal grooming, first aid and beauty care.

The amount of space consumers are increasingly demanding for their bathrooms should not just be interpreted as the need for a private spa to be used alone. For part of the reason why demand for large showers, double-ended baths and double washbasins is growing is that the bathroom's popularity as a jointly used room is growing too – and not only amongst families. Today the bathroom serves not just as a place for personal maintenance but for health and relationship maintenance as well. Accordingly, people aren't only cuddling on the sofa, they're snuggling up in the bathroom too. What better response could there be than to cater to the desire for more cosiness and create space for seating, fitness equipment and more room to move in general? Room for playing children, yoga exercises, press-ups, bookworms and glorious relaxation. Sanitaryware manufacturers such as Duravit and Emco are picking up on this trend.

One area that will probably continue to be largely disregarded when it comes to communicative needs is the toilet. For some years now, the trend has been to separate or even remove it from the bathroom proper: the loo is migrating out of the bathroom and into a separate lavatory within the home that is accessed via the bathroom or hallway. This is one respect in which our bathroom culture differs from that of our ancient Roman role models and pre-modern practices. 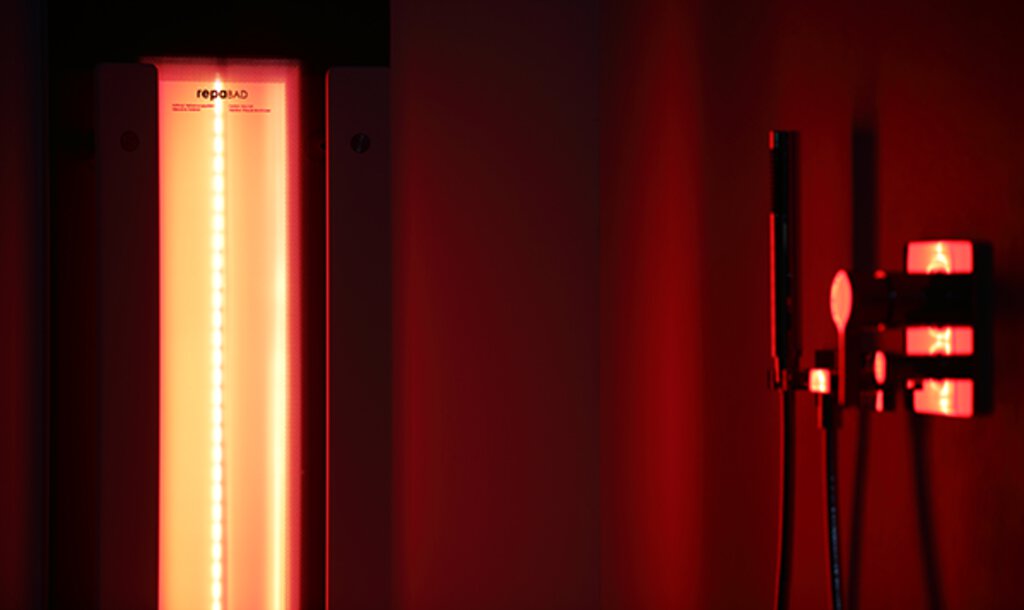 Deep heat for the shower

With Bilbao, Repabad aims to transform the shower into an infrared cabin and encourage the private bathroom’s evolution into a “health room”.